Senator Ali Ndume has called for salary slash for civil servants who no longer go to work due to the COVID-19 pandemic.

Ndume who is the Senate Chairman committee on Army, gave this suggestion when he spoke at a media briefing in Maiduguri, the Borno state capital today June 8.

He said despite the effect of the COVID-19 pandemic, the state and Federal government are spending more to sustain personnel and non personnel cost. He opined that those who are not going to work now should be given palliatives and paid less.

”The government should critically look at the recurrent and personnel expenditure which consumes about 70% of the budget. More should be pumped into Capital. People should make sacrifices. This is the time to look at issues critically.

I think there shoukd be more sacrifice especially on the personnel side. How can you sustain the same personnel and overhead cost when even the work they are doing, most people don’t go to the office now and they are being paid fully for the month. Is there any justification for that?

If you can’t work because of the pandemic, then you should be given palliatives and be paid less”he said 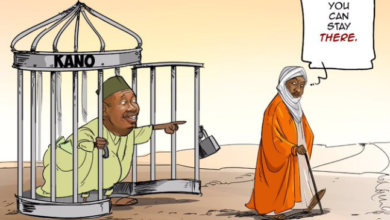