Former minister of Education, Oby Ezekwesili has called out President Muhammadu Buhari to remind him that the country is not a military state.

This comes after one of the front liners of the EndSARS protester, Miss Modupe Odele’s Passport was reportedly seized by the NAIA Comptroller of Immigration on the order of the Nigerian Army without an Order granted by a court.

Accounts of some EndSARS promoters were also reportedly frozen.

In a series of tweets she shared via her Twitter handle, Oby said that if all these moves by the government are to silence the youths , then it hasn’t learnt anything from the time thugs were sent to hijack the EndSARS protests.

“While other nations are trying to figure out their Post-COVID19 priorities and strategies, what do you think our own country is doing? Well, Buhari is busy with repressive acts against his young citizens who merely asked to be allowed to live by the Police he supervises.

We are a constitutional democracy and actions must be anchored on the Rule of Law. Miss Odele’s passport cannot be seized by NAIA Comptroller of Immigration on the “order” of Nigerian Army without an Order granted by a court of the land. We are not a military state, Buhari.

I’m grateful to Femi Falana, SAN for always being available to take on cases of gross injustice against our citizens. Miss Modupe Odele @Mochievous is not standing alone. Millions of sensible Nigerians are standing with her. She and her peers gave Hope on what Nigeria could be.

If the repressive acts of illegally seizing a citizen’s passport and freezing others’ bank accounts are meant to intimidate the young #EndSARS protesters into silence, it means Buhari government learnt no lesson from hiring thugs to break their protests. How pitiful.”. 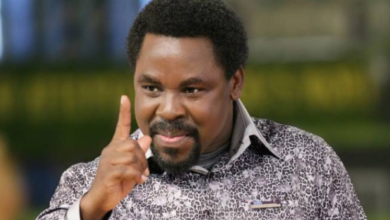 Organize those who are in isolation for Prayers -T.B Joshua

Police Officers Caught on Camera beating a Woman have been dismissed